on March 9, 2012 By Donna Miller In Our Preparedness Journey Leave a comment 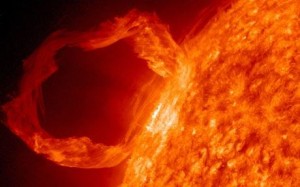 March 7th, 2012 was supposed to have one of the largest solar flares of the 20th century. Is this a sign of more active sun emissions or a cyclical pattern for which we had no technology prior to the last few centuries to gauge?

My belief is that it is a combination of both. We know more now than we ever did before. Research, technology, instant broadcasting (due to the internet) and even a wide array of ‘experts’ easily accessible to us like never before.

Does that mean that these happenings with the sun are changes to we must be alarmed? Or does it mean that we simply have recently payed attention to it in greater detail and thus it has taken a higher priority of focus?

Again, my belief is a combination of both.  EMPs, Coronal Mass Ejection and Solar Flares have been around since the creation of the sun. From the audible ‘Let there be light.’ phrase was spoken – the sun has simply operated this way. Just because we had not the means to know it before, and it’s new to us, doesn’t mean that gigantic solar flares have not been effecting our environment for thousands of years.  Our concern now is it’s affect on our lifestyle – electricity and the things it secures/provides.

Not only would an EMP or Coronal Mass Ejection be inconvenient, it would disrupt much of life as we are accustomed in the 21st century.  Power grids would go down from city to city. With that, water systems and emergency management communications would not function properly. Security for prisons would cease to be in place. This is all due to our dependency on electricity and computers.

Even experts cannot agree on what the total impact would be or how long it would take to restore electrical order.

As close as only a couple of hundred years ago.  A massive Solar Flare, EMP or Coronal Mass Ejection would not have put such a speed-bump into daily life as it would now. I highly believe that our planet was experiencing these solar issues at that time, perhaps not to the same magnitude, but still experiencing them. People who did not depend upon electricity, went about life as normal.

Now the ‘benefit’ of knowledge, technology and instant news can disrupt what is normal on both ends. Prior to any Solar Flare or such we can be warned and worry. After an EMP we would be affected greatly.

“Your Preparation Station” Radio show is interviewing the creators of Flare Aware on March 10. 2012 – if you listen LIVE or later (on our Archives) you’ll hear more about alerts to these events, the differences in an EMP, Solar Flare and Coronal Mass Ejection and see how you can at least be a step ahead.

Realizing that we can actually do nothing to prevent what happens with the sun, preventative measures to protect what you can are wise…but, controlling the situation completely is impossible. So rest in Faith and do not let your heart be troubled. Be diligent to prepare what you can, but put it into perspective that:

1. We may just be more edgy because more information is instantly available.

2. It wouldn’t be LIFE if you could control EVERYTHING.

Best Blessings and enJOY this Journey!